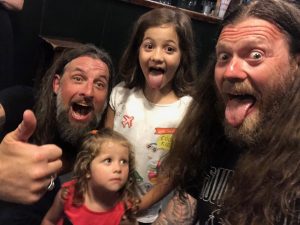 Post-gig meet-and-greet with our biggest, most important fans. Ourense, Spain

The last few days have been a total blur of amazing food and wine, laughing, drinking, hot springs, drinking, exploring, drinking, and so on… We arrived in Ourense for our gig on Sunday night at Café Cultural Auriense. Once again, we’ve had the benefit of being looked after by folks who may as well have been old friends. Before the gig we hung out at a local bar and met a few of the native hoodlums. Got a wee bit tipsy and had a ball. Then we had our load-in, and after we were settled, and sound was checked, we went to one of the best restaurants I’ve so far had the pleasure of – Café Monte Carlo. This place is amazing! Octopus (pulpo), baby eels (zamburiñas), Galician wine, and so on… The gig went very well – another great crowd and huge fun. Oh! I forgot to mention that on the way into town today we stopped off at the local hot springs – Termas Ouratiz. No need to say how DELIGHTFUL that was! The time since Sunday has followed a similar pattern. Sleeping in until late, then a delicious breakfast (usually with wine), huge walks exploring the old town, a trip to the termas, then dinner, drinks, and enjoying the incredible experience of meeting the locals and sharing the stories of each other’s lives. The sun is up late here – it’s usually still light at 11pm – and so around the streets and plazas you still see families out and about until at least midnight. It’s wonderful to witness and experience. We are in Ourense for another day. We’ve been staying above the venue and so have had easy access to a lot of local stories! Soon we are off to Plasencia and continue working south until we hit the Mediterranean and Estepona. We’ve arranged to rent a townhouse there for three days – according to Benny and D, Estepona is the jewel in the tour. It’ll mean three days on the beach, more incredible food and drink, and more delightful indulgences of the senses!

We arrived in Plasencia without any drama. Drove through the Sierra de Gredos, a stunning little mountain range poking out of the middle of the desert you’ve seen in spaghetti Westerns. Unfortunately, the venue was pretty shitty. The owner acted like he didn’t want to know us – the first time we’ve experienced this kind of attitude on the tour. The food they gave us was disgusting – the worst food of the tour. I was given a flap of tough beef smeared with some overly-sweet red sauce, with a side of old dry chips. A fairly big let-down after the Caligula-like indulgences of Ourense! Admittedly, I met some great local people afterwards, which was lovely. Back at the hotel I had another quick video call home and then straight to bed…

Apparently this man is a very famous Korean film star. Anyone recognize him? León, Spain.

From Plasencia we have travelled to León. We had a show booked for the 26th, but it was cancelled after the promoter was badly beaten in a robbery two days previously. We had a meet and greet at the venue, though, so we were able to set up the merch stand and make a couple of sales. Still not sure why we couldn’t just set up and play anyway. Maybe it’s a thing here that the promoter must be on site for the show? Our couple of days in León were fantastic, though. Benny and I watched a couple of World Cup matches, got roaring drunk, hung out with some exceptionally delightful locals, drank more, ate great, and so on… Benny ended up getting lost on the way home from the venue – the bloody idiot wandered around town for hours, trying to find his way back after running out of power for his phone, but then eventually managed to find someone who could help him who ended up taking him home, fed him breakfast, and then brought him back to the apartment. Spanish hospitality at its best!!! Everyone was panicking (D had been to the local police station to check to see if he was in the drunk tank!) except for me – I accurately predicted his exact situation. I knew he would turn up eventually coz no one falls on their feet like Benny James! Ha! We had a helluva time in León – the place very much rivalled Ourense for its food, beauty and nightlife.

After León we were off to a small town called Aldeamayor de San Martin, a little place almost in the middle of nowhere. We arrived at the venue – El Zagal – and my first impression was one of “Oh, shit! What have we got ourselves into here?!?” It was a restaurant with a couple of old couples, quiet and very un-rock-and-roll-venue-like. HOWEVER… This show turned out to be a total frikken blast! The guys at El Zagal cleared out the tables and chairs and turned the place into at 150 capacity room, which I’m pleased to say we filled. I have no idea where the people came from, but come they did, and we had some huge fun. GREAT crowd! Again, met a bunch of lovely locals. One very nice lady invited me back to her Winnebago – “Just for sleeping,” she said… 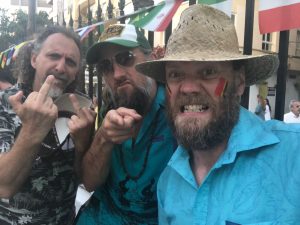 ESTEPONA! WHAT A PLACE!!! Gorgeous seaside town. 50 kilometres from Gibraltar. The Costa del Sol. Incredible seafood, my first swim in the Mediterranean, hot, sunny, drank exactly enough tinto de Verano (too much / not enough), crazy! Stayed in a little townhouse about a 20 minute walk from the old harbour. Certainly, the eating and drinking has been balanced out by all of the goddammed walking we’ve been doing! A lot of time spent swimming, hanging at the beach bar, swimming, hanging out at the beach bar, and so on. I had a trippy experience meeting the brother of a friend of mine who was dj-ing at the beach bar we hung out at. I’d never met the guy, he mentioned that he had family in Melbourne. I said, “Oh yeah? I’ve got a mate who is African-Canadian in Melbourne.” I told him his name and this guy just about fell over and screamed at me, “NO WAY! THAT’S MY BROTHER!!!” We were both in shock, and Romel, my new best buddy in Spain was in tears. Hilarious and wonderful synchronicity! The night after that little trip we played our gig at Louie Louie – a small but terrific venue. MASSIVE PA for such a small room, which is always nice. Sad to leave a place where the living is so good, but we are off play in Orihuela tomorrow, and we came here to play music, right?!?

From Estepona we travelled to Torrevieja, on the Costa Blanco. This would be our base for our gig in Orihuela, about 30 minutes drive inland. Not nearly as picturesque as Estepona, but still great fun. We had an apartment on the beach, across the road from a very nice restaurant and bar, so again we were like pigs in mud! The Orihuela show was utterly brilliant! A great crowd, full room, a super venue. We were very well looked after by the guys at La Gramola – they provided a lovely dinner for us at the Chinese restaurant around the corner from the place, and they made sure we were happy and comfortable. It was pretty cool to see the posters on the wall of the place from bands like King of the North, Don Fernando, Grindhouse and the Hard Ons! The next day as we were walking past the restaurant across the road, we saw Eduardo and Abel, two of the guys we’d met from the gig the night before hanging out at the front of the bar. They invited us to join them, and we ended up having quite the session with them. Great company!

Torrevieja was the penultimate destination for us on the tour. The last show of the adventure was Rocksound, Barcelona. A famous rock venue that has hosted pretty much everyone that does the club tour circuit of Spain. Once again, we were very nicely looked after by the crew at the club. We utterly smashed the show, and I was totally spent afterwards. Met some beautiful local folks, and a couple of peeps not from Spain who now call Barcelona home. I was so happy that we were joined by a couple of great friends from Melbourne who were in Europe at the time, and plus my wife was there to meet me, so that we could continue with a holiday for another three weeks around Europe. It was a fitting way to end the tour – a killer show with great friends, and the promise that it would all happen again in no time!

A HUGE thank you to Teenage Head Music who represent us in Europe. Also an especially MASSIVE thank you to our two tour managers, Max and D, who were the ultimate professionals. They were organised, put up with no bullshit from anyone, and always had our best interests at heart. We can’t wait to work with you guys again! 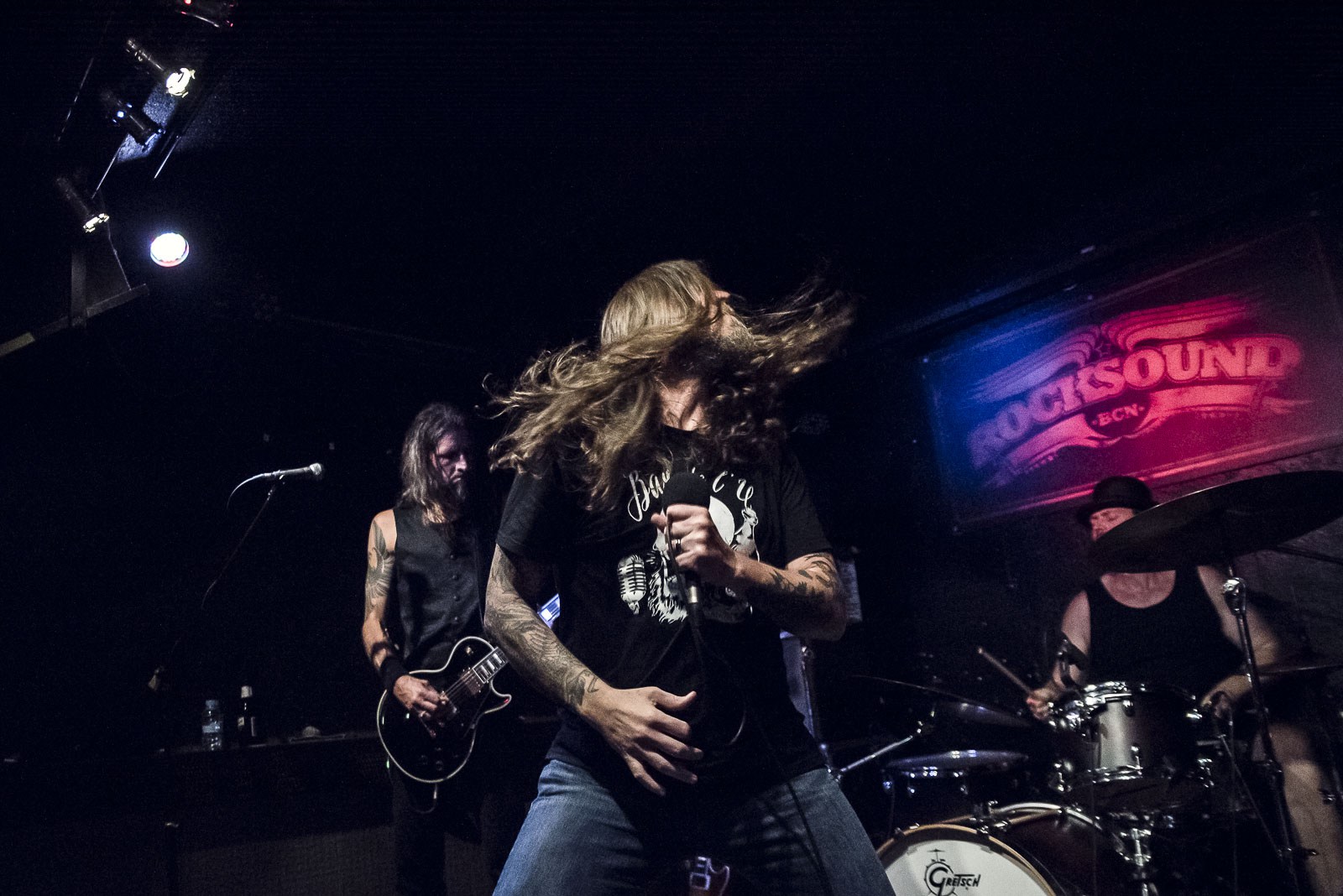