Just a little lunch in Besançon with Koops and Benny.

Two days rest back in this beautiful town. Lots more sun and time spent in it. Lots more amazing food and wine. Have met so many delightful people. The French in this place have a great love of life and its sensual indulgences. No small wonder they excel at wine and cuisine! A couple of reviews have been posted about our Krefeld show and they are overwhelming in their praise. Great to hear that the locals are digging our stuff. We’ve had A LOT of great eating and drinking here in Besançon. Still can’t shake off this bloody cough and cold though. It’s probably driving everyone else nuts. I feel terrible about it. I’m just glad I have lots of good medicine here – hahaha! To have come all this way, and after two weeks to still be struggling with it is doing my fucking head in.

Starting to really miss my family back home. Touring is amazing, but the separation from loved ones – especially kids – is difficult.

Well, the voice is officially GONE. Last night the boys did a mostly instrumental set, with a couple of covers thrown in for good measure. I stayed upstairs in the musicians’ apartment (yes, that’s actually what it is called) and went to bed early. This morning I got up early and walked from the venue / apartment into the centre of Köln to get some football gear for my kids. A big walk in the beautiful warm sun. Now we’re off to Deinze, Belgium. We are receiving emails from our agent about how much the World Cup has affected pre-sales, and would we like to cancel the tour? It’s a bit late for that now – we’ve no choice but to press on. This is not the kind of email I need right now. Win or lose, we are here, and it’s going to get done.

The Muziekcafe Elpee in Deinze is a terrific little venue. Kat looked after us very nicely. The voice is still gone, so it was the same format as the gig last night in Köln. Only a handful of payers, which after the email I got yesterday filled me with dread. We stayed at our agent’s house in Kortijk. He was away in Spain, but we met his wife who was simply delightful. Slept in until 11am. Voice feels slightly better. Went for a brekky burger at Paul’s Boutique, a local institution (delicious), walked in the beautiful Belgian sun for a while and now we are on the road to Spain, via Orleans. We were meant to playing there tonight, but the show has been cancelled (with only a couple of days notice, mind you). Again, no pre-sales. Again, World Cup. The venue has been gracious enough to honour their commitment to accommodate us for the night, though. On we go! 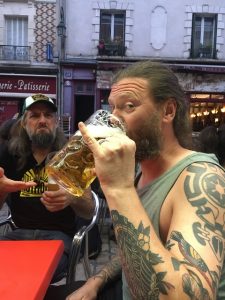 It was an eight and a half hours drive to Orleans yesterday. Got stuck in Paris traffic and it was a complete nightmare. We arrived in Orleans late, but we went down to the Blue Devils bar where we were meant to be playing and had a few beers. My voice continues to improve, which is a massive relief. Orleans was beautiful. Now we are on the road to Spain. This will be a ten plus hour drive to Vitoria-Gasteiz, about 45 minutes south of Bilbao, in Basque Country. I’m getting sick of everyone telling me how amazing Spain is going to be – I just want to GET THERE!

Far out, the drive was worth it! Such dramatic and stunning country! We arrived at the venue – Urban Rock Concept – in Vitoria-Gasteiz and were met by Susi and Maribelle who were wonderful hosts. Beers, snacks and a killer PA and stage. We started playing at 9.45pm and at first I thought we were doomed to another very small show, but within a minute of us starting the place was filling up and jumping. A great response from the locals! We had a great meal afterwards, and Maribelle made every effort to ply us with the best Basque wine. I was a good lad and only had a few glasses! On the road to A Coruña now. The last of the really big drives, according to D…

Last night we played Sala Mardi Gras. Wow! A great dirty little dark and hot rock venue! The owner, famous in the Spanish rock scene for his legendary venue and even more legendary liver, is Jaume, but I named him El Presidente (Paco, the sound man, was El Jefe). He is a true rock character. The minute we entered his venue, after croaking out a quick “Good Morning, ladies” (it was 4 o’clock in the afternoon), he had beers out for us, and a line of bourbon shots. One of our party (they will remain nameless – and no, it wasn’t me) said that they didn’t really feel like bourbon. El Presidente glared at him, slammed his hand down on the bar, and said, “Today we drink like men!” Naturally, we all had a shot. Once we had set up and done our soundcheck, El Presidente took us out for a delicious dinner, and a visit to a couple of other bars. And then, the gig. Thankfully, it was a sold-out show. It was so hot inside I nearly passed out a couple of songs in. Just couldn’t catch my breath. We had kept up with playing one cover in the middle of the set, which Benny sang, which served as a breather for myself. Thank Odin’s beard! Smashed the gig. Met some truly delightful locals. Drank a couple of cleansings afterwards. The suggestion was for the party to continue, but I was all out of party at that stage. I followed the beautiful A Coruña bay all the way back 4 kilometres to the hotel – a stunning walk at 3 o’clock in the morning – made a quick video call back home and then went to bed. Everyone else was back about 6am, so I shudder to think how they’ll be feeling today! A short drive today, though. Off to Cangas, nearer to the Portugal border. Looking forward to seeing more of this stunning country. 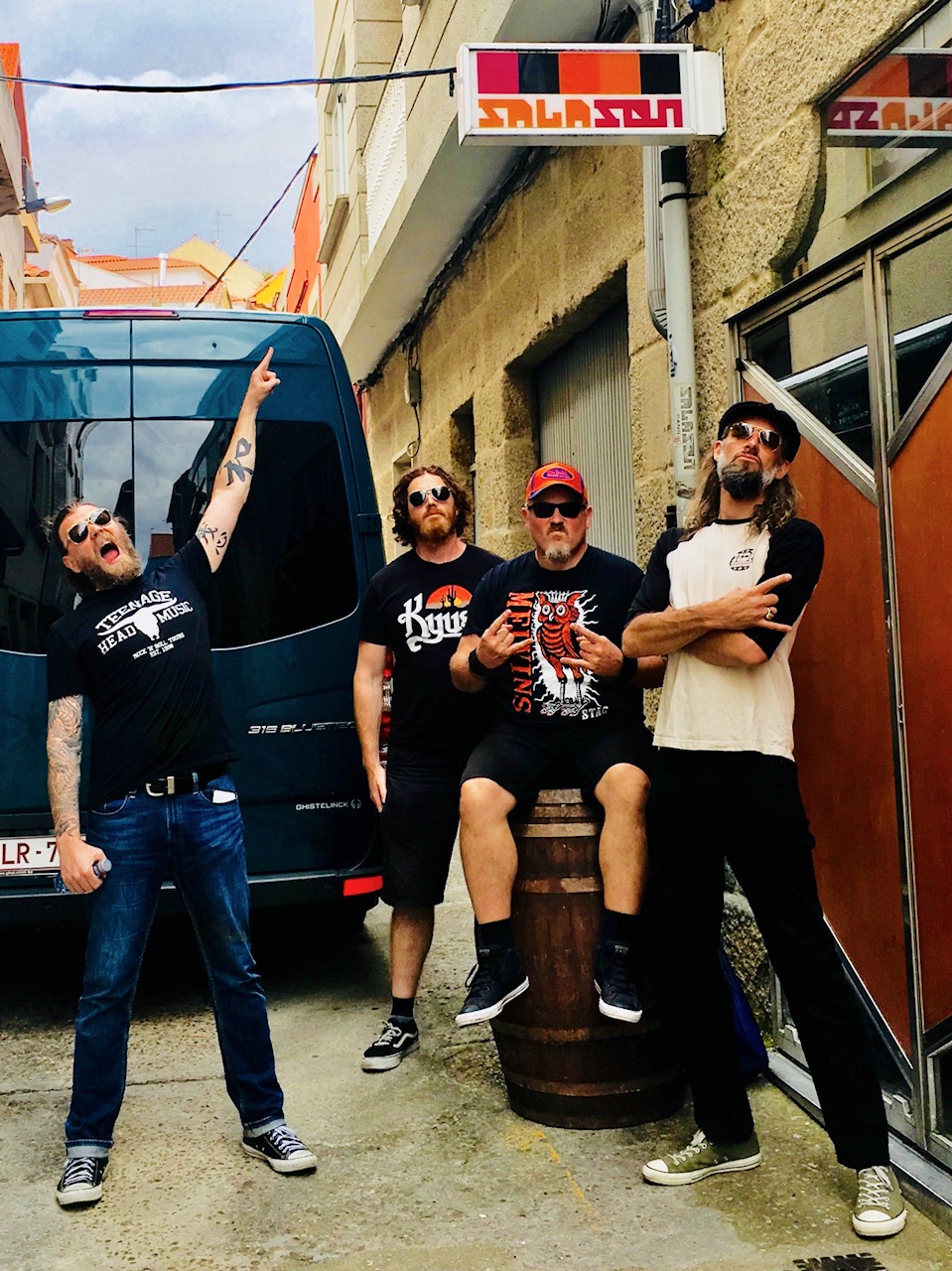 Last night was our show in Cangas, at a fantastic venue called Salason. Great show! Full room, played great, and a really fun and crazy crowd. Before the show Benny and I went off in search of food and wine, but all we found was crap tapas (boring touristy shit) and beer. Thankfully they make great beer in Spain. We met a whole bunch of delightful folks. My impression of Galicia is everyone here is pretty much like everyone else in the world, but with a Galician twist (dhuh!) They are funny, they have a great love of life, a love of community, local pride, local scorn and a huge curiosity about the world around them. We have been overwhelmed by people’s willingness to engage with our music and ourselves. Last night followed a familiar pattern: after the show I hung out for a while, spoke at length to some delightful locals, met a young man named David, a wheelchair-bound man who loved going to gigs, and who was an absolute legend, and once the van was packed I came straight back to the hotel, showered, and went to bed. Benny, Craig and Pete kept at it until I’m not sure what time. Still trying to protect my voice, but I just don’t have the stamina to write myself off after every show. Having said that, though, beer and wine is SUPER cheap here, and super excellent. Benny and I had a couple of glasses of some excellent red last night at only €1.80 a glass. Boy are we getting ripped off in Australia!