[Ed – We were going to get El Colosso’s Euro tour diary in installments, but when touring, and especially overseas, tour life can totally consume you. So instead, we recieved it all in one big massive lot and will post it in three installments (Parts 2, 3 & 4). Such an awesome read and we’d like to thanx Koops and El Colosso for sending this through, such an awesome band and great guys too! Cheers!] 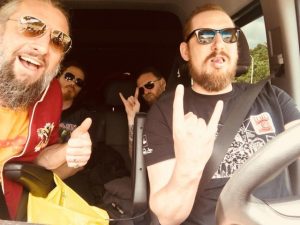 On the tour bus on the way to Bremen with Max – Teenage Head Music.

Feeling very run down after the crazy-long flight. Got to our apartment right in the middle of Brussels, dropped off our gear and went straight to the bar across the plaza. Baguette and beers! Crashed early after having some fruit and water. Lost my headphones somewhere between Dubai and Brussels, so mission #1 is to get a new pair…

Today we met our tour manager from Teenage Head Music – Max. A cheeky and cool Frenchman who has spent a lot of time on the road. There is really only one main rule for the tour – no drugs on the bus. Max also informed us that rule number two is – do not be late to the bus. Cool. We had a big six hour drive from Brussels but Bremen has turned out to be very nice. First gig is Meisenfrei Blues Bar. A great venue, and great staff. A bit freaked out by the crowd – everyone seemed pretty old and uninterested, but it turned out they loved us! I lost my voice during soundcheck and got a bit spooked. Max gave me some magic lozenges and by the time we got on stage it worked out fine. Hope it clears up! The boys drank on after the show but I crashed after a long hot shower…

Cool town, but a shit gig. Hardly any turnout – looks like the promoter did fuck-all, to be honest. The venue was a big barn of a room, and with only a handful of people the sound was overwhelming. The sound guy was lovely, the staff were friendly enough, but disappointing all round. Max was not happy with the venue, either. Second show of the tour, and hopefully we don’t see another repeat. At least I can say I had a hamburger in Hamburg. Voice is not behaving as it should. After the show the boys went out exploring the Reeperbahn. Now THERE’S a lot of fun up-to-no-good adventure in THAT part of the world! I went straight to bed…

Friday was our gig in Krefeld, at a fantastic little club called Kulturrampe. Marcus was the owner, Klaus did sound, and both were great to meet and work with. The venue arranged for our dinner at a Spanish restaurant next door, and then we had our gig. AMAZING! The place went off! It was a near-sellout. After the show we spent a lot of time meeting and talking with the locals, and what a great bunch they turned out to be! One guy was a massive fan of Seedy Jeezus, and so was intent on contacting Lex to tell him that he’d seen us play. We sold and signed a lot of merch which is reassuring for our bottom dollar, but the punters were mad-keen to get their hands on a token from the night. Love to come back here. The voice though – not working so well…

A sleep-in in Nuremburg, a delicious breakfast down the road at a local café (I had kaffee große – essentially a black coffee in a small bucket-like cup. DELICIOUS!), a quick video call back home to my wife and kids, then Max, Benny and I spent the day wandering around the old town. One place we stopped at, on Max’s recommendation, was a Mexican-themed bar for a shot of mexicano – basically a strong mini bloody mary. As we walked through the black curtains into the bar we saw that every table was decorated with sex toys, lube and condoms. The lady at the bar, after pouring our drinks, invited us back later for the party, with the promise of porn on the big screen. Ha! Interesting party! We stopped at a nice pub, had a lot of dunkels, met some great locals, and saw Germany lose 1-0 to Mexico in the World Cup. Tomorrow we have the big drive to Bratislava…

I was not expecting to get this date in this part of the world, but super-glad we made the big drive to get here. The gig was in a big marquee, and the crowd were all seated. It felt very strange – but it sounded fantastic, and our local sound man was a gem to work with. It was another close-to-sold-out night. By the end of the show pretty much everyone was standing and really digging it. Another great time meeting the locals. Pulled out the footy and showed some of the folks how to kick and handball. Hilarious! Tomorrow we are faced with a fourteen hour drive across four countries to Besançon, France, which will be our base for a few days…

Selastat – Indulging in some French goodness in Besançon, France.

Two glorious days in Besançon! Such a beautiful town! We had free accommodation above a little bar called Bar de l’U, so we took full advantage! Had some epic walks around the town, amazing food and wine. The dinner we had the first night consisted of bone marrow for entrée, then my main of beef tartare, washed down by one or two (I forget how many) glasses of delightful Alsace red. Superb! Lots of sun, working on the tan, and not missing the Melbourne weather one little bit! We played a huge show in a little town called Selestat. Every year in France on the 21st of June there is a national celebration of music, called Fête de la Musique. Most of the larger towns in the country put on free concerts, of all music types. We were on the main stage in the middle of town, playing with Arkona, a folk-metal band from Russia, Captain Ivory, a blues-influenced band from the US and A, and Sol An Gar, a local Alsace rock band. We had a great time backstage with the Captain Ivory and Sol An Gar guys – we were very well looked after by the crew. We played the place down, and this show was our biggest ever – around 3500 people. We got a great response from a great number of people who had never heard of us. It was HUGE fun! We also swapped tour managers with Captain Ivory – another Teenage Head Music band who are nearing the end of their tour. Now we have Dieter “Heavy D” Boessart taking care of us. A tough-looking ball of a man, covered in tatts, straight talking, and no-nonsense. Oh, and he has an inflatable unicorn wading pool.

We played a cool club called Rock N Eat. What a difference a day makes. From 3500 people in Selestat, to about 10 in Lyon. I don’t think the promoter did a single thing to ‘promote’ the show, but instead relied on the cover band playing before us to pull the heads. To be honest I’m getting sick of hearing about how the World Cup is affecting business. Despite the poor showing we still managed to sell a bunch of merch, so we did ok. Worst food so far of the tour, too. Disgusting re-heated tv dinners with stale bread. Gross. The voice is getting worse. Starting to get concerned as it’s just not recovering. We’ve got two more days to have a break (back to Besançon – hooray!!!), and fingers crossed it’ll come good. Where the others have been indulging in all the good stuff, I’ve had to reign in any excess. Frustrating! No big drinking or smoking for me. Pared back to an absolute minimum. 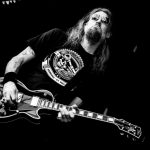 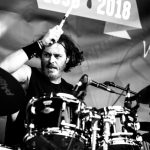 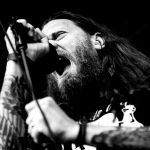 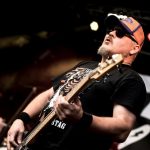