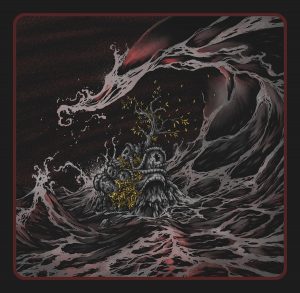 Taking the journey by ‘slug through this Polish doomscape can prove to be quite an epic trip. Cruising in from the Outer Rim Territories to settle in Wroclaw, and in the wake of stark politico-anarchic punk/rock of ‘80’s brutal communist regime, where skinhead gangs were often encouraged by government agents to attack the punks at gigs, citing them as “enemies of The Peoples’ Democracy”, the broad expanses of this LP are the antithesis of the dark times and violence in Poland’s past. Not sure if there are any remnants of the agro political attack left behind in Spaceslug’s lyrics.

‘Obsolith’, with its dark crusty bass and droned vocals is the first leg of this trip. Spaceslug don’t wanna play 2.5 minute pop songs, and this is no different. 8 minutes of doomy drone. And don’t get any ideas about vocal hooks to latch onto. There ain’t a hook to be heard.

‘Spaced By One’ broods and chugs simultaneously, a throbbing powerhouse dirge. Eternal Moments surprised at times with just the gentlest of melodies.

‘Words Like Stones’ lashes out in a fashion not unlike the Cows in their more introspective moments, if they band were wearing straitjackets.

‘Vialys Pt I’ + ‘II’ see the ‘slug open things up a bit. The most dynamic track on this collection, it trawls through a dirty array of sounds and leads up to the closer, ‘I, The Tide’.

This songs starts gently as it picks its way through the to the heavier second progression. Some great interplay between the bass and drums along the way, as the guitars wind up and down throughout it all before cracking into the lumbering final stages.

Joy Division (and namely Closer, with its’ ethereal and haunting tones) often comes to mind when listening to Eye The Tide. I could easily imagine Ian Curtis fronting them (musically they’re worlds apart, but the cold and lonely vibe fills in the blanks), which brings me around to a minor complaint about Spaceslug; too weak vocally. The music though, is every thing you could ask for in the space-doom genre.

Spacelug’s Eye The Tide is OUT NOW and available HERE.