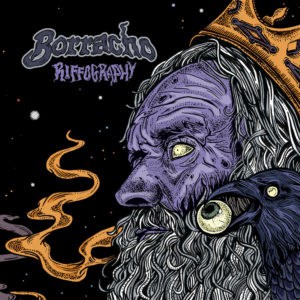 Stoner rock power trio Borracho have had a busy 12 months; releasing two full-length LP’s in this period and they’ve backed up the excellent Atacama with Riffography, and it’s yet another grease and dirt road trip from hell.

Soundwise, Borracho are a gutsy and powerful unit, heavy on both grooves and distortion. And they know when to pull back as well as when to drop the clutch and hammer the riff home too. Supremely cohesive songwriting coupled with their playing always makes for a great album as well.

Riffography opens with the ball-tearing ‘Rectify’, and is quickly backed up with ‘Circulos Concentricos’, a re-recording of ‘Concentric Circles’ from their 2011 debut, Splitting Skies, and given a Spanish facelift and a great mangled guitar attack.

‘Stockpile’ is another heavy and taut rocker and overflows with dense, gritty distortion.

‘Know The Score’ is a gentler tune with a slight change of pace (mostly!).

‘King’s Disease’ has a great central riff and one of the more melodic tracks. 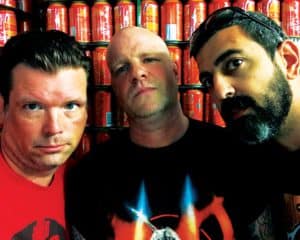 ‘Fight The Prophets’ brings to mind Circus Of Power with its’ slinky slide guitar lines. Not a bad thing as far as I’m concerned!

The creeping doom of ‘Animal Magnetism’ brings Riffography to a close. A dark song that hints at some evil madness or brooding malevolence, and never gets above a crawling sludge pace. It’s a cool and classy finish too.

The “production team” have also dialed in some hot and nasty sounds on Riffography too. Reining in wave after wave of fat and chunky tones and committing them to tape has been done in fine style, and the sheer power of the band has been retained for the masses to consume.