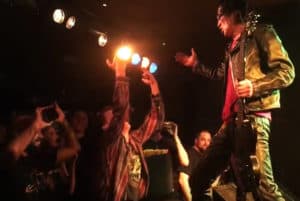 Every time I head off to a show or a photoshoot I have this mini panic attack where I’m 100% convinced I’ve forgotten something important, only I haven’t. Tonight I spent an hour travelling to a show just to discover I left my camera battery on the kitchen counter. Of all the nights I choose tonight to screw up and I have all the regrets. ALL. THE. REGRETS. So I decided I’ve give reviewing another shot so I could feel less guilty for having a door spot. I know right, what’s wrong with me?

First up for tonight was The Shakeys. This is the third time I’ve seen them this week and in total contrast to the other nights this room didn’t have too many people there to see the opening act. This didn’t stop the band putting on one hell of a performance though. Come to think of it, I don’t think I’ve ever seen The Shakeys do a half-assed performance! Claire is a badass front woman and full of attitude. They started their set off with ‘Don’t Make Me Crawl’, and during their next song ‘Pink Demon’ people started getting off their seats and moving closer to the stage. They mentioned opening for Marky Ramone on Tuesday night and how he insisted they do a couple of covers. They decided they loved the songs and kept them in their set. Quite literally, it’s the same set as Tuesday night. This just made my job tonight so much easier. I can’t say that for the other bands though. During their final song ‘Drinkin Till Dawn’, they were joined on stage by members of The Beehives GoGo Dancers who danced up a storm. I’ve now decided The Shakeys need gogo dancers at every show! My opinion matters and everyone should listen to me.

“Guitar Wolf are in Northbridge. Pretty fucking epic…and Leeches have a smoke machine. Also epic”. So Leeches were now on stage and started off their set off with my favourite song ‘Cracked and Broken‘. Sadly they had no set list so I have no fucking clue what else they sang tonight. Singer Benny J Ward tells the growing crowd “My guitar sounds like a vee dub farting but I’m going to continue anyway”. When they announced their next song was ‘Born and Bred Fuckhead’, it was met with some heckling on who in the room was indeed a fuckhead. One guy looked confused so I’m guessing he was crowned with the title. This band play loud in your face punk rock, they also play it so fast their set finished about 15 minutes early. No real complaints though they’re bloody funny!

I’ll admit I know nothing about Guitar Wolf other than one song on YouTube (High Schooler Action – look it up!), but when Melbourne promoter Mik Da’Re wrote on Facebook that he was bringing them to Australia for a tour and about how great they were, well I wasn’t missing them coming to Perth! As Guitar Wolf were about to come out every person in the room moved closer to the stage. The room suddenly looked more full and next thing there’s three leather clad T-Rex’s on stage. Without a clue on who was who under the masks we watched while one started to pour a beer down his masked mouth and flow straight out the bottom of his jacket and down his guitar. The masks were ripped off and they got straight into playing, everyone was dancing. Their second song had singer Seiji swinging his guitar through the air and me convinced it’s way too early in the set to smash your guitar just yet! Bassist UG pulled a guy up on stage and threw the bass on him to play while he sang. The guy had no idea what to do but bluffed his way through it. Suddenly Seiji was had his mic stand on the ground for a floor show with the crowd, then was back on stage, and basically I don’t think I’ve ever seen such an energetic show before in my life.

Four or five songs in and Seiji was sweating so much that it just constantly dripping from his chin. I haven’t seen a drip like that since my old house had a broken air conditioner. How his sunglasses never slipped off his head is beyond me. These guys just never stopped moving. They were constantly jumping, pulled people up on stage, Seiji even crowd surfed. UG took this time to sit on the end of the stage in front of us playing his bass and some asshat of a photographer decided to block our view instead so he could get a photo. I’m assuming more than one because the fucker never moved. Where’s the 3-song rule when you need it? It’s a general rule in music photography that you don’t get in the way of the people who paid to be there. The people pay to see the band and not the back of your head. He spent most of the night in front of the stage whereas the other photographers kept moreso to the sides out of everyone’s way. I hope your photos are worth it buddy!

Next they played a cover of ‘Summertime Blues’, a track I knew!

The band left the stage and Seiji fell to the ground near the bar. I would have to assume from dehydration because he’d surely sweated out every ounce of water in his body, but then they were back for an encore with a couple more songs. I had to laugh to myself that the drummer from Leeches was wiped out from their set yet here’s a couple of guys in their 50’s just going completely batshit crazy on stage for an hour and not even needing to take a breath! This band was fucking awesome and it didn’t take me long to regret how much I didn’t have my camera battery on me. This would’ve been a kickass show to shoot and I don’t care what anyone says, iPhones are shit and don’t take good photos. Everyone in Perth who bitches that nobody supports the local music scene, you should probably try supporting the independent tours that come to Perth and not just the big name bands. You missed out on one helluva show, you also missed me fangirling with UG while I got my record signed afterwards. This is definitely in my Top 3 shows of the year and I’m hoping sometime tomorrow my ears stop ringing!