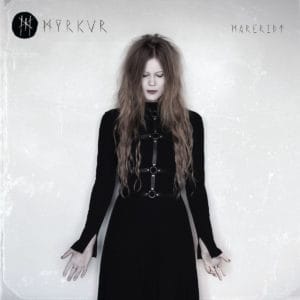 Amalie Bruun, better known as Black Metal multi-instrumentalist Myrkur has been the subject of both global praise and repulsive condemnation in her short three year existence creating magnificent music under the moniker. Having received atrocious death threats after the success of her exquisite debut LP M, Ms. Bruun utilised this animosity to provoke her creativity and the result is her astonishing sophomore record Mareridt.

Title and opening track ‘Mareridt’, the initiation into her artistic response and journey to the Earth’s reaction to the organic design that is Myrkur, acts as a spiritual calling; an invitation for her followers and adorers to come close to safety from the storm that is the banishment she is about to afflict on her adversaries. In retrospect it is a historic “Kulning” call and it honestly defies beauty.

‘Måneblôt’ is the intense black metal “ice storm” Amalie has incited to obliterate her naysayers. In this track she displays her prowess as a snarling alpha female wolf protecting her pack and herself. The tumultuous thunder is eased with her angelic serenade for a time with world shattering percussion incredibly accentuated by a string-ensemble bridge, acting as an eye of the storm. The thunder then roars back via Myrkur’s shriek before the composition ends with the songstress’ soothing hum; a forest lullaby to ease the environment around her. Within two songs the observers have experienced an expedition that could be likened to an opera theatre performance – astounding.

‘The Serpent’ begins with a marching guitar line leading Ms. Bruun into a nocturne war cry that is more hypnotic than combative – matter of factly it is harmonious. This is further highlighted by the presence of piano with Myrkur singing in English rather astonishingly.

Amalie then experiments further with a nod of respect to Swedish songwriter Anna von Hausswolff in ‘Elleskudt’. This is then disrupted via a subtle black metal maleficence before closing with a chant, possibly to the forest and its’ fauna “little eyes, following me now”.

Continuing flawlessly is ‘De Tre Piker’, a majestic track that seems to combine New York’s Unto Ashes with the traditional norse folk sounds of Wardruna. Outer influences actually become internal with the following ‘Funeral’, where gothic post-cinematic-metal queen Chelsea Wolfe lends her talents to Myrkur to create a duet screaming magnificence and breathes an aural soundscape that is flawless.

Lead single ‘Ulvinde’ is of the traditional Myrkur formula which brought her the global attention and affection she is beyond entitled to with her debut EP. Where ‘Gladiatrix’ is an odd yet stunning amalgamation of pop and black metal, sung once again in English by Amalie. In proper deciphering of the track, it almost acts as blueprint to Ms. Bruun’s musical career, from her early indie pop days to her now experimental black metal platform.

‘Kætteren’ is another Wardruna driven norse folk pagan creation that interestingly adheres to the instrumental formula. Then closer ‘Børnehjem’ is the oddity of the LP, a gothic demonic story spoken in a haunting ghostly child voice; almost an accompanying post-script to the movie The VVitch, that may also be a reflection of sorts. It is eerie and a terrifying chapter that lasts with the listener with a spine-tingling effect.

This isn’t just an album, this is an artistic ambition, an astonishing answer, an illustrious invention, a stellar sequel and most importantly an astounding accompaniment to an already immaculate musical collection. “Mareridt” may translate to nightmare, honestly though, Ms. Amalie Bruun aka Myrkur’s unbridled brilliance and virtuosity is that of hypnotic dream-like rapture.