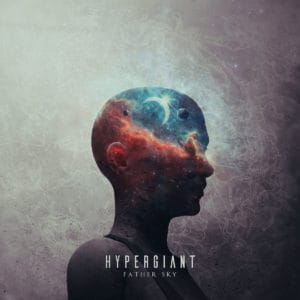 Sydney based stoner metal four-piece Hypergiant have been kicking around the scene for several years now. I first caught ‘em a few years back during their infancy, and already with a set of fairly decent heavy rock songs and some covers by the likes of Mastodon and The Sword thrown in, which left no doubt as to the bands’ parentage. They released an EP, Planet Cracker 2-3 years back, and it was a cool collection of tunes. But flash-forward to Father Sky, and there is a very different beast stalking the scene. The songs are brutal, and the production is mature, well-thought out and effective and should also see these dudes garner some well-deserved attention. They’ve interspersed their powerful metal bludgeon with an aural soundscape suited to an alien horror film, which certainly adds colour to their stylistic attack.

‘Perseus Arm’ and ‘Colossi’ are both heavy-handed balls of crunching guitars, an excellent drum barrage, and some cool effects-laden bass lines. ‘Colossi’ has a great, frantic high-wire riff to kick it off too, and carries this vibe throughout the song.

‘Island 3’ delves into some atmospherics, and eventually builds momentum to power through some great churning mayhem throughout the rest of the song.

‘Retrograde’ is yet another punchy metal slug-fest. The depth of the production shines well on this song too, as do the use of dynamics. ‘Entropy’ crosses some distinctly “High On Fire-esque” ground, with the vocals and a raw beauty to the riffs.

‘Interlude: Krakenmare’ is a droning acoustic-driven tune with a good selection of metal dirges hurled at the listener as well. Spooky and dark around the edges!

Enter the epic ‘Ryu-Un Maru’. Clocking in at nine minutes, this is a Leviathan-like sea-beast. Slow-moving and lumbering, but powerful and unstoppable as the tide at the same time.

‘Apogee’ wraps things up with a lush solo to lead into the proggy vibe and final chapter to Father Sky.

I wouldn’t call this is a concept album, but thematically, all the songs seem to tie in well. Not necessarily the easiest of things to achieve, but with this Nathan and crew have delivered a mighty album with Father Sky, bruising and at times sullen and moody. The sounds are big, the songs well-built and also played without ever wavering or veering from the path they set out on. A must-have release for all you stoner-metalheads out there!