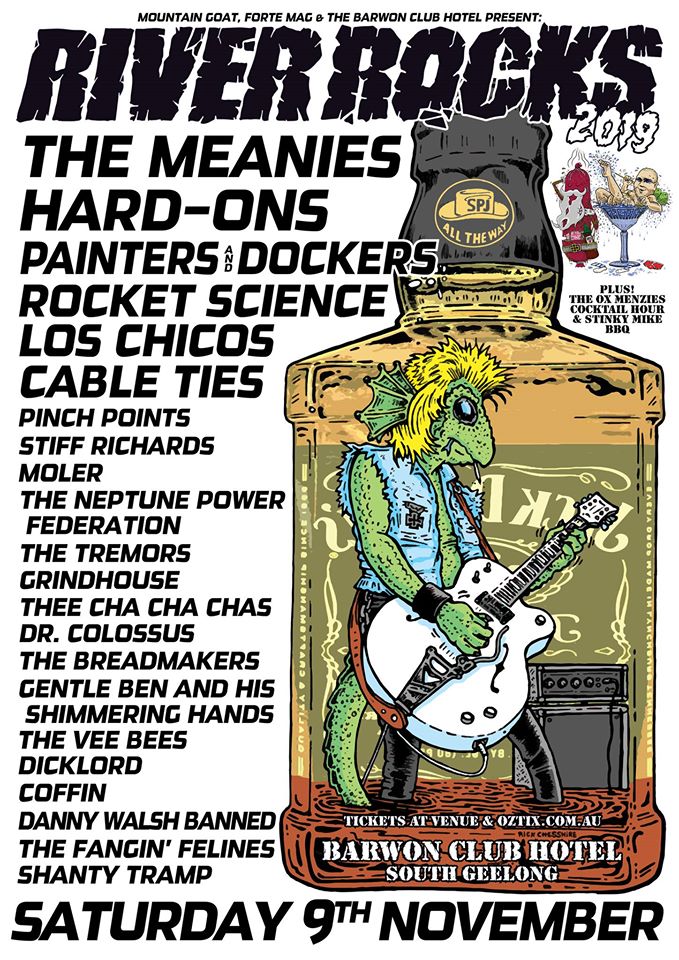 To paraphrase the late great Chris Wilson, ‘If your ears aren’t ringing at the end of the gig fuck off and go home’.

Your family reunion has been relocated from your grandmother’s house to a dirty dive bar in Geelong, but instead off your family members sitting around the piano playing ballads, your going to get kicked in the head from people jumping off the stage, and the soundtrack is every band you love from now until yesterday.

Every year the Barwon Club puts on the dirtiest, filthiest, rock n roll festival this side of the gutter, all your best friends are here, and you’re all sleep deprived because you’ve all just crawled out of a bar 24 hours before. This behaviour is not out of the ordinary, it’s just how the rock’n’roll community rolls.

Danny Walsh Banned kicked off proceedings on the main stage. No matter who Danny is playing to he always manages to win them over, his kinetic energy is something you can’t bottle.

Fangin’ Felines were a band that weren’t on my radar, that’s one of the beauties of River Rocks, you go with a list of bands you don’t want to miss and leave seeing half a dozen you have never seen before and loving them all.

The Corbett brothers (Ben and Geoff), were making their semi annual trip down to Melbourne from deep dark Brisbane, they usually play with their psychotic outfit Six Ft Hick, but this time The Hick were left in their cage and Ben and Geoff brought down their solo projects instead, first up was Gentle Ben And His Shimmering Hands. Ben Corbett is the most charismatic psycho singer on the scene, from rock’n’roll crooner to an unpredictable caged animal, you never what way the set will go. Ben has you in the palm of his hand from the first note, he sways and contorts his body like someone from the jungle with Dengue Fever.

The Tremors, which is Geoff’s side group, have only had one EP (Can I Get A Whiskey ?) and one album (Cash Up Front, No Kissing). Like the Hick, The Tremors have that blend of sleaze grind rock’n’roll with trailer trash 50s blues.

When you get the Corbett brothers playing together, it’s like getting a ten tonne truck t-boning your house, but when they are separate it’s a different kind of energy, still squalling with rock’n’roll vitality, it’s just with the Tremors and Gentle Ben, they have access to a hand break.

Moler make a return to the stage after a long absence. They did some reunion shows in the last year or so, so this added set was much anticipated. Nothing has changed, they are still the riff heavy, anthemic band everyone loved back in the 90s.

Dicklord were a lot of people’s favorite band from the day, and it’s pretty easy to see why. They were offensive, and hilarious, with songs like ‘Debra’ which has lyrics like “Fuckin Debra, where’s my money you owe me, Fuckin Debra, you vampire cockroach”, seriously what’s not to love ? A new army of fans will be screaming these songs at a gig sometime soon.

The Breadmakers are a Melbourne institution. Their 60s garage rock’n’roll vibe instantly won the crowd over. They’ve been playing for so long, they know exactly what turns a crowd on.

The sun was setting, the breeze was picking up and then The Neptune Power Federation hit the stage. I’m struggling to accurately write what this band is about. The lead singer dresses up in a wild gothic outfit, with a head dress that would put any contestant from RuPaul’s Drag Race to shame. If you can imagine how wild the costumes are, that’s only half the fun, the music itself is incredible. Like a fire breathing cyclone, absolutely nothing will prepare you for this band.

Dr Colossus are a Simpsons themed stoner rock band, if that is not enough for you to break a limb to get down the front, I don’t know what is. They turn up on stage wearing Stonecutter outfits, if you know the Simpsons, you’ll get the reference straight away.

Painters and Dockers jumped into the fill the gap because the Cosmic Psychos had to pull out at the last minute.

The Dockers are the ultimate party band, lead singer Paulie Stewart baits the crowd, with his hilarious stage banter. They’ve always been a working class band, with a strong social conscious, so when the band broke into ‘Die Yuppie Die’, the crowd got turned on its head, and screamed the chorus like a footy anthem. The crowd left elated with a shit eating grins all over their faces.

Cable Ties just get better and stronger with every gig they play. Lead singer Jenny McKechnie has a singing style that is a mix of Siouxsie Sioux and Poly Styrene. Her vocals duck and weave between Nick Browns throbbing bass, like a heavyweight boxer, they are absolutely hypnotic. All the band members build a massive storm, and then pull the trigger on the crowd just as they’re about to peak. You leave with the bass penetrating your skull, and your heart full of strength.

After a hiatus The Meanies are back causing chaos. It’s also the 30th anniversary of the band, so they’ve turned up the amps and have been ripping apart venues all around Australia. River Rocks loves the Meanies, so the crowd was out in full force, high flying bodies, Link Meanie screaming until his throat was red raw. Nothing has changed in 30 years, they might be a bit older and broken, but their chaotic energy will never be diminished.

Stiff Richards smashed into the scene completely out of control, hand break off, skidding onto the stage, easily one of the most exciting and adrealized bands that has emerged in a long time. I managed to get down the front, only to be thrown every way but backwards. Their set was pure energy, lead singer Wolfgang Buckley (could his name be any more rock n roll?) throws himself into the crowd head first, with no safety concerns whatsoever, he lands back onstage unscathed, and finishes the set like nothing ever happened. It’s all over in a blur, they played at the best time, just as it was getting dark, people were very drunk by this stage, so there sense of abandonment was at its highest.

I pulled myself together and crowbarred my way back to the inside stage. Rocket Science recently released Snake, their first album in over ten years, so they were on a high even before they hit the stage. Roman Tucker is the ultimate front man, charismatic, well dressed, and unpredictable. Roman towers over the crowd, with his giant stature he can be intimidating if you haven’t seen them before, but any fears are immediately put aside, because Roman’s charm has already won the crowd over.

It was getting on in the night, and my energy was diminishing.

Los Chicos are no strangers to our shores, they come back every couple of years because Australia loves rock’n’roll, and Los Chicos are the best party band you could ever add to a bill. Wild and crazy to the hilt, it would be hard to find another band that parties and gets a crowd on their feet as much as Los Chicos.

Headlining band The Hard-Ons are the kings of Aussie pop punk. They have an enormous local and international fan base, and it’s so easy to see why; short, sweet, and with killer riffs, they have their formula down pat, so there’s absolutely no need to change anything at all. The crowds were dying off by now, it had been a massive day, 12 hours plus, but as soon as the band kicked off, it was like the crowd had a collective enema of speed. They were the perfect band to finish off the day.

Every year The Barwon Club staff and crew put their heart and soul into this festival. I left a broken and deafened punter, memories blurred, but the music remains what was loved the most.