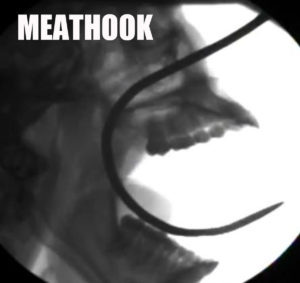 It’s always hard when someone you know asks you to review their band. It could be awesome… but what if it just isn’t your thing? or even worse, what if it’s shit?  So when Andy Simpson of the legendary Don Fernando sent me a message and asked if I could listen to his new project Meathook, I thought I would do the usual thing of sending it on to someone else, but then I clicked on play…

So all you Tool fans who have been waiting 612 years for a new release, ‘The Beginning’ kicks off with an intro that would slot perfectly into Undertow, with riffs straight from the Blues For The Red Sun mixing desk, and a solo that goes on for miles; the song steamrolls across the great expanse covering everything from hard edged stoner to doom and all in between. There are no lyrics, no words, just like this review, nothing could truly describe the sound of this track, except that ‘The Beginning’ is the perfect introduction to Meathook, which will string you up by your ears and make them bleed for more.

‘The Godfather’, has a little more of a body swaying stoner edge, for fans of Orange Goblin, and well anyone with ears that just wants to listen to fuckin awesome music. When your boogie van breaks down in the middle of nowhere and you’re pissed off that the weed has run dry, hit eject and throw your Fu Manchu tape out the window into the searing heat and watch it melt. Then throw in this track and crank it. 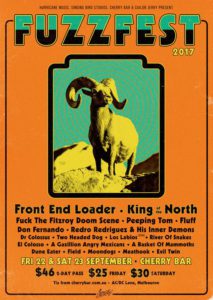 The extra grit and rust around the edges is what Meathook is all about, it’s got the anger and drive that’ll get you through the road trip from hell and turn it into a riffed-up smoked-out blissful journey to riff heaven.

‘Celtic Warrior’ wraps up the debut EP that was recorded, mixed and mastered in a day at Singing Bird Studio, Frankston by Andy Simpson, the band’s drummer (also the guitar wizard from Don Fernando), filling out the lineup is Brad Young on guitar (Moondogz) and Stu Anderson on bass (Organ Donor). I highly recommend grabbing this EP. Meathook are one of the few instrumental bands that prove vocals can get in the way of a good riff, eg Smoke Witch, Earthless, Hotel Wrecking City Traders, and with the weight of early Kyuss and the Melvins. For a band that’s only been around for about ten months, it’s pretty damn impressive, and can’t wait to hear what else Meathook serves us up in the future.

Meathook’s debut EP is available now digitally through Bandcamp.
Keep you eyes out for a CD and vinyl release in the future on their Facebook page.
Meathook are playing FUZZFEST at Cherry on Fri 22 and Sat 23 Sept with a massive lineup. Check out the Facebook event for more info.