Why DEAD is the most underrated band on the planet + ‘We Won’t Let You Sleep’ Album Review. 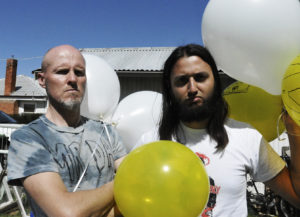 The first time I heard DEAD I was blown away. In terms of sheer brute force, weight and the volume of their sound, it’s huge! Melvins x 10 plugged into Slayer’s wall of Marshall stacks, you know, if they were real. They also continue to blow me away in a lot more ways as time goes on. It’s been 6 years this month since I first heard them, which was seeing them live supporting the Hard-Ons at The Tote, and since then, I’ve gotten to know the guys and have a deeper understanding of their music and where it comes from. It’s completely pure, unintentionally awesome, inspired, uncompromising, relentless, driving, and unashamedly their own beast. I could keep going. They continue to make solid kick arse music that’s completely honest to who they are and what they believe in.

There are similar bands to DEAD but to me there are none that come close to the complete package that they are. Two-piece bands have long been ‘flavour of the month’ and I wait for the time that having no members in a band is the new punk and only releasing the empty sound of a blank cassette to the throng of fans that bow down to the shock horror of morally corrupt self-indulgent creativity, but I digress, DEAD are a two-piece because that’s their choice and they don’t need anyone else. Their sound has more weight than a band with ten members and live, well I’ve seen floorboards quiver in anticipation as they set up their gear.

As well as putting out a few things here and there on other labels like Tym Records, Wantage USA, and Eolian Empire, all their releases are self-funded through their own label, WeEmptyRooms, with their artwork being done by bass player Jace, and the printing done by their drummer Jem. The accompanying art always complements their sound perfectly; raw, honest, creative, there’s light and dark and it also includes what it is that makes them who they are, like the odd Devo energy dome as Jace is a long standing Devo devotee. Gotta love them even more for that! There’s recycled record sleeves, wooden box sets including vinyl and cassettes, hand-numbered hand-screened hands-on, the personal touch is everywhere throughout everything they do. And this is also just the tip of the DEAD iceberg.

We’ve all seen bands come and go, favourite bands that have been around for 20 years only to evolve to a watered down sound of who they used to be, maybe that’s just our taste changing and not theirs but it’s all around us, other bands that never seem to change their sound and become stagnant and boring. It feels like there are only a handful of bands that evolve and grow as they move forward yet retain where their sound first came from, the hunger and energy they had when they first started; DEAD are that band. If you aren’t familiar with them, check them out, have a listen, and DEFINITELY go and see them live. If you’re already a fan, a big FUCK YEAH to you! Love your work and let’s continue to spread the word. 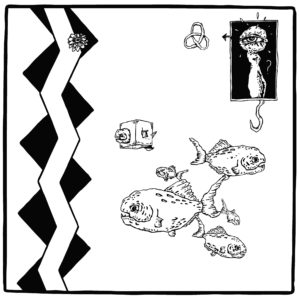 This is the third installment in a four LP series, The Trilogy, and is once again recorded by Toshi Kasai (Melvins, Helmet, Big Business). The guys hit the Sound Of Sirens Studio in LA last year either side of a US tour. The album features Kevin Rutmanis (Cows, Melvins, Hepa. Titus) on slide guitar as well as Kasai on guitars, keys and vocals on various tracks. If that isn’t enough to reel you in, I don’t know what is.

We Won’t Let You Sleep kicks things off with ‘Frankly’ a slow moving yet driving piece of fuzzy bass that lingers for just over a minute. It’s like opening the front door and peering into DEAD’s house before you walk in on them in the lounge room jamming and shredding skin from our faces as it gets into the very Melvins sounding ‘Fingers As Arrows’ . Though such a big and obvious reference isn’t a bad thing for DEAD, they still retain more than enough of their own vibe to put a choke hold on your attention.

Track 3 ‘Chartreuse Blew’ is one of my personal fav’s on the album. It’s a constantly chugging beast that charges forward with a few little rest stops thrown in to catch your breath. Another fine example of DEAD’s use of weight with and without sound; even in the silence there’s depth and it feels heavy, those gaps also make you realise that they’ve got your heart racing and head banging along.

I’m clearly a big fan of the band’s catalogue, and for me We Won’t Let You Sleep is possibly their best to date. It feels like they’ve grown immensely with their last few releases, experimenting with ideas, approaches to songs and collaborations. It’s also possibly their friendliest for radio and the general public’s consumption, yet it doesn’t feel like that’s what they’ve tried to achieve, it feels natural.

This album almost feels like their own equivalent of ‘The Wall’. There’s more textured layers than before with Rutmanis and Kasai on board and it gives it more of a visual feel at the same time. There’s really no reason that We Won’t Let You Sleep shouldn’t make DEAD as big as the Melvins and The Jesus Lizard. It’s that damn good. It’s just as complicated yet easy to listen to and kick arse to play as loud as fuck! This release should draw in more people than before that have perhaps not jumped in full force to DEAD’s back catalogue. I think it’ll be a more approachable release for those that have found some of their songs uncompromising ferocity a little too extreme. DEAD have seriously blown me away yet again. Fuckin gob smacked is an understatement for this one. Even though the album was initially released on cassette at the end of last year on Brisbane’s Haemorrhage Records (and quickly sold out), this release on CD & vinyl may possibly be the first time most will hear it. So I’m counting this as a new release, and calling it now, 2017 Album Of The Year.

Standouts: ‘Fingers As Arrows’, ‘Chartreuse Blew’, ‘Picking Teeth’, ‘Don’t Skimp On The Change’ and ‘Pylons’. Ok so that’s more than half the album, I should’ve included every track.