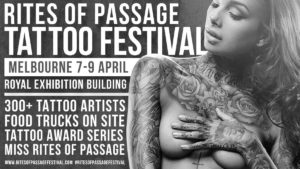 With a great first impression on my visit to last year’s Rites of Passage, I thought it’d be as good a time as ever to come back again to see what the acclaimed tattoo festival had to offer this time. On a colder April day than usual, it was great to finally return to the Royal Exhibition Building for the annual body art expedition.

With mostly locals at Rites of Passage such as Frankie Lee’s, East Brunswick Tattoos, Melburn Made Ink and Benny Bones, there was a collective of international talent that showcased the abilities they had, such as Visual Orgasm from Singapore, Spacifik Ink from New Zealand, Three Tides Tattoo from Japan, Tattoo Family from Malaysia, Paul Martin Tattoo from Scotland and even a travelling artist named Joshua Sara from Melbourne. Each and every parlour came with their own unique style to display throughout the venue. From Japanese to European, to expensively detailed portraits, anything that came to the mind of a patron was there in that exact building.

Even though body art was what everyone in town came to check out, there were a number of stands that sold different merchandise including guitars from Cranbourne Music, band t-shirts, haircuts and hair products from a handful of stalls, as well. There was also a ‘worst tattoo’ competition held onstage, where a majority of the contenders had either old, homemade or just plain stupid pieces done on them – one of which was a cactus shaped like a penis on a guy’s leg that he apparently got on the day.

Unfortunately, with very little cash on me, I wasn’t able to get any ink etched into my flesh, this time. But it didn’t mean that it was going to ruin the experience for me. If a kid was brought along by his parents and was a fascinated by everything that was put on display, then anyone can enjoy themselves there, me included. Though the whole event brought back memories, this year’s Rites of Passage still felt different. Can’t specifically say how, but maybe it’s just because I wasn’t like everyone else participating in having their flesh marked. But still, Rites of Passage earned themselves organised another prestigious gig for the expo, and hopefully the next will be just as good!

Sidenote – shout out to Holly V from Liquid Silver Tattoo for having a Coheed & Cambria keywork symbol tattoo as one of her main photographed pieces in her stall. I have that symbol on my forearm! *laughs*

Check out Callum’s VLog from his Conspiracy Youtube Channel.