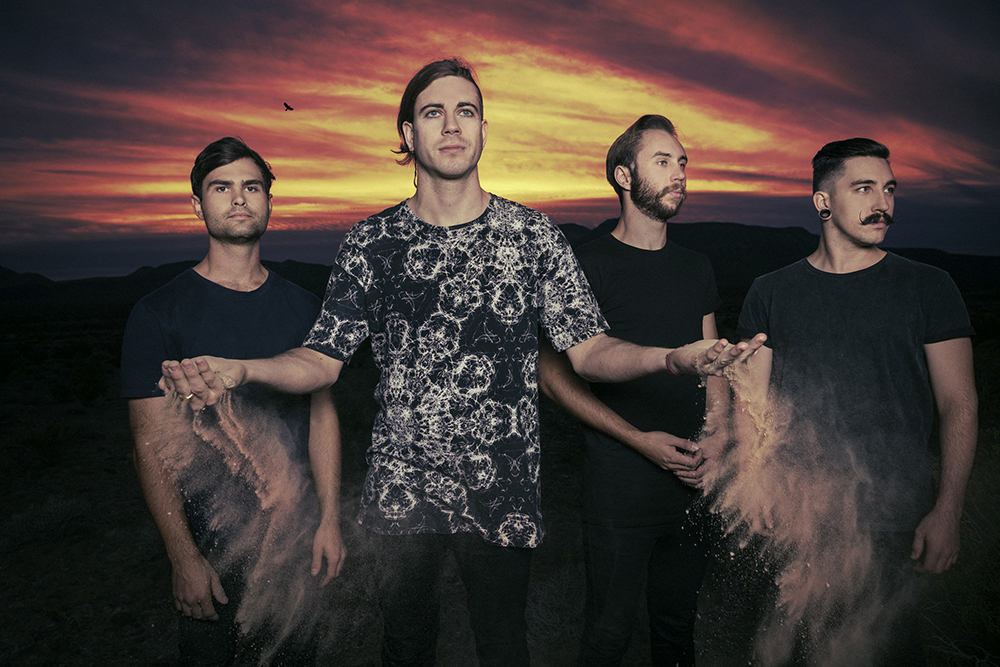 Author and strategist Gary Ryan Blair may not be of international notoriety yet, but his deficiency in fame certainly does not impede his intelligence. Whilst this introduction may seem rather off topic to the reader at this early stage, there is reason behind the absurdity. There is a quote by Mr. Blair which reads as: “Advancement only comes with habitually doing more than you are asked”. Certainly this reads as a somewhat obvious “advice statement” to achieve success; but it is possible to uncover further applications to this aforementioned passage.

Byron Bay’s In Hearts Wake are a prime example of adopting the cited statement and translating it into their motif. For instance, when the melodic metalcore quintet entered the studio to record their sophomore album Earthwalker released in 2014, the band did more than what was asked of them, A LOT more. Matter-of-factly the five-piece recorded two full-lengths in secret and followed the wildly successful second record with their third album Skydancer just a year later.

The hard work did not stop at just the recording commitment; far from it. In Hearts Wake have been living in planes with no sense of time and on highways in a questionable van environment. The fruits of their labour are revealing themselves and on a global scale in growth, as unclean vocalist Jake Taylor explains:

“Certainly and dare I say to 100%. 2015 was a really great year for us, we toured the USA four times; twice early on in February and March, but we returned at the end of the year with Parkway Drive and that’s where we were able to witness the growth of our following well within a year. People had digested us so well and the support was unbelievable on all accounts: merchandise, singing along and moshing. It is definitely happening especially in America; Europe has been a bit of a slower ascension mostly because it is just a massive area. Obviously every country is quite different from the next, but the tour we did in Poland and Czech Republic with August Burns Red, the people were going absolutely mental for us, even on a unplanned headliner we had to do which we sold out. So we definitely want to return to Europe as soon as we can.”

This is just the tip of the iceberg for the outfit’s world-wide-adventures; a recent trip to Japan surprised the five Byron Bay beach bohemians as the mannerisms involved with live music in a different nation, more-so culture, was rather different to what IHW were accustomed to.

“Japan is definitely like stepping into the future, it’s a bit of an eye opener but you feel pretty at home because it is quite westernised. I guess, in Japan or rather quite a bit of Asia, English isn’t really their forte unlike Europe where the majority of people can speak a bit of English. It was astonishing though, I would speak in-between songs and the whole crowd would be dead quiet hanging on each word I said because they actually want to hear what you’re saying. To them it is of the upmost importance that they try and understand you and their respect for you is otherworldly; even if there was a 1000 people in the room, you could of heard a fly buzzing with ease. It was insane and odd, but when you start playing, there are fans with surgical face masks on crowd surfing and yelling because they know the lyrics, they go so berserk! It was probably the most unique show we ever played, the Japanese show we did.”

It would seem that the quintet are well-travelled and experienced in their metalcore endeavour, but as Jake informs Desert Highways, there is always more to learn and admire. Especially when touring with experts of the heavy music career pathway, a favourite band of this scribe truth be told, Buffalo’s Every Time I Die.

“Those shows were exceptional, most of them were in France and from memory one was in Spain. Nevertheless, the Every Time I Die guys were super nice and go completely nuts when they perform, I have no idea where they get their energy from. Especially their guitarist Jordan Buckley, he had the wildest stage moves every night; I remember he was really sick for a few days with the flu, he looked like he was on the verge of death. Anyways, he would just wake from his illness induced coma, hit the stage and completely lose his mind like a maniac night after night. It’s so cool to see guys like them who have been around for over fifteen years still upholding such a professional manner and giving it their all and still killing it.”

When Desert Highways reach Mr. Taylor he is answering from the comforts of his own home eagerly awaiting the opportunity to dive in to the ocean for another day of surfing; a well-earned rest from the Earth exploration IHW have undertaken over the last few years. Fortunately for the band and Australians also, the five-piece have been added to the Groovin’ The Moo festival respectably waving the heavy music flag as numerous highly regarded outfits have done in the past.

“Yeah we are really ecstatic about being a part of it; we have heard great things from our friends in Northlane who played it last year. Honestly though, other than that, I have never been to Groovin’ The Moo so I don’t have any idea of what to expect. From what I can gather, it’s a bit like a risotto festival with a lot of different bands going into one big pot and it kind of works.”

Jake continues – “It’s quite the honour to be waving the heavy flag; representing our genre, so that’s nice so we can stand out. Whether that is good or bad is up to the public and if they like us or not; but we have an opportunity to shine and hold our own with our sound.”

But how do you think this recognition of heavy music came to be? How does it feel to have In Hearts Wake as part of that elite group like former players of the festival Northlane and Parkway Drive?

“Without doubt it is a privilege to be included amongst that list and certainly the elite of Australian heavy music to a degree. I should say that this is definitely a nod of respect to Triple J also for embracing not just heavy music but us as a heavy band in Australia. I mean we were asked to do ‘Like A Version’, we had a feature album and a few other acknowledgements which was excellent recognition for us. Ultimately it is predominantly indie and alternative music which receive the credit a lot, hip-hop also and some EDM artists; but heavy music seems to take a lot more time and we are stoked to have been awarded with that inclusion.”

Groovin’ The Moo is a festival which only reaches the regional parts of Australia, something which IHW are no strangers to having embraced the smaller towns of our fine nation for practically their entire existence as a band. As Jake elaborates further:

“I must confess I am super eager to hit up the regional parts of Australia again, it is just awesome. Also we have a really good time in those parts outside of the shows, because there is always the really cool stuff to see and incredible places to eat. People also seem really genuine in those more remote areas than in the cities; don’t get me wrong I know a lot of city-based people will be attending the festival too, but the local folk are just pumped to have a major event like this come to them. I think In Hearts Wake have actually played every one of these cities before except Oakbank, so that’s a cool thing to accomplish with this adventure.”

To end our lengthy conversation, this scribe tried to uncover some further secrets from the frontman to see if there were more tricks up their collective sleeves. It was revealed a surprise third album was to be released which ended up being a hoax (it’s ok if you feel for that April Fools Joke, thousands worldwide did); however there is a joint EP release out now entitled Equinox through UNFD with friends Northlane and more touring to follow with shows featuring both bands playing at the same time (yes ten members onstage at once). Is there anything else though?

“There is plenty more to come and a lot more secrets (laughs)! But we have a lot of cool projects and a bunch of touring. Keep your eyes open everywhere and everyone, all will be revealed, it is brewing but you will just have to wait and see.”

As author Bryant H. McGill says: “Curiousity is one of the great secrets of happiness”, so be sure to stay intrigued planet Earth. 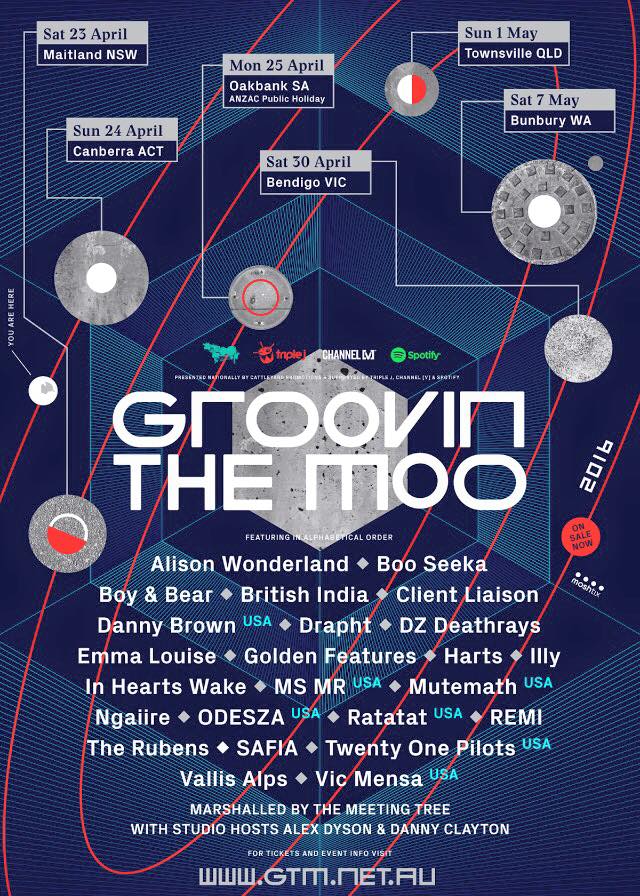