ECSTATIC VISION – FOR THE MASSES – EPK

Philadelphia, Pennsylvania, US.
Desert Highways has the Australian Label Relase. 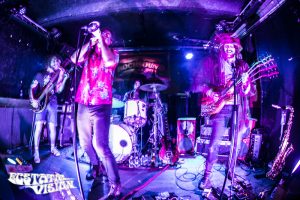 Ecstatic Vision are a heavy psych quartet based out of Philadelphia, Pennsylvania. Formed in 2013 by Douglas Sabolik in the wake of his previous band A Life Once Lost, Ecstatic Vision evokes a psychedelic sound heavily drawn from the likes of 60s Detroit rock (MC5), krautrock (Can, Guru Guru, etc.), classic space rock (Hawkwind), Zam Rock, Afrobeat and The Stooges just to scratch the surface. To date the band has released three studio albums and has managed to tour all over the United States and Europe supporting their respective records.

Prior to Ecstatic Vision’s formation, Sabolik and Jordan Crouse (EV drummer 2013 – 2017) both played in metalcore band known as A Life Once Lost, active between 1998 and 2013. Sabolik was a founding member of the group at the age of sixteen and, according to an interview with Northern Transmissions, had begun writing material for the band before A Life Once Lost had broken up, ultimately composing half an album’s worth of material by 2013. Sabolik, Crouse and Michael Field Conner (bass) would found the group as a trio in 2013, playing local shows and by the next year would be touring around the United States.

Ecstatic Vision would sign to Relapse Records (US) not long after and, following touring with Enslaved and Yob, would release their debut album Sonic Praise on 30 June 2015. Sonic Praise would see positive reception from the likes of Pitchfork, Echoes and Dust and The Obelisk to name a few. The band toured the United States alongside Ruby The Hatchet and Uncle Acid and the Deadbeats before embarking on the band’s first tour of Europe the next year. Following the tour Ecstatic Vision would begin work on a follow-up.

Ecstatic Vision started 2017 with a short tour of SXSW, leading up to the release of their second album Raw Rock Fury, released via Relapse on 7 April 2017. Aiming for a “dirtier” and “rawer” rock sound ala early MC5 and other Detroit rock bands and thus recorded by the band with Joe Boldizar. Raw Fock Fury would see critical praise from the likes of The Sludgelord, Vice, New Noise Magazine and Psych Insight Music among others. Ecstatic Vision toured Europe in support of Raw Rock Fury, including appearances at DesertFest Berlin and Sonic Ritual. Sometime after the tour the band would sign with Heavy Psych Sounds (Italy).

Under The Influence would follow on 4 May 2018, an EP with the band covering the likes of Hawkwind, MC5, Chrissy Zebby Tembo & The Ngozi Family, Keith Mlevhu and Amanaz, exploring the band’s interests in Zam Rock. In support of the EP the band performed a string of shows with Here Lies Man and made festival appearances at the likes of Duna Jam and Stick & Stone Fest among others. On 26 April 2019 the band announced that a third album was finished right before a Spring tour with Heavy Temple and appearances at Heavy Psych Sounds Fest. Following a reissue of Sonic Praise on 6 September 2019, the band’s third studio album For The Masses was released on 20 September 2019, during a North American tour with Brant Bjork and preceding a fall tour of Europe. Sparking a further evolution in the band’s ever-expanding psych sound, For The Masses would see pre-release praise from the likes of Outlaws of The Sun among others.

Desert Highways is proud to bring the Australian release of For The Masses to Ecstatic Vision fans as well a new audience. It comes in two different exclusive sleeve and various vinyl colours.

For all interview, review and other enquiries, please feel free to email.

Stream For The Masses through Bandcamp