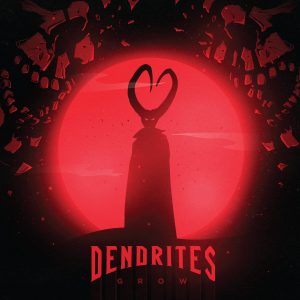 Greece, that hotbed of rock’n’roll, has hit us with a band of young upstarts called Dendrites. Dendrites play your classic 90’s metal and have delivered up a new LP called Grow, and in true dirty metal form is bucketload after bucketload of screaming METAL solos, guttural, gravelly vocals, thumping drums and low-slung basslines.

Dendrites get straight down to throwing punches on Grow, with opening tracks ‘Get The Fuck’ and ‘Bullet Dodger’, both full of furious riffs and guitars but ‘Throwing Rocks’ sees the band pull it back a bit, a tune no doubt written after a few well-earned cones and allows sufficient room to expands into a groovy jam.

‘Dreamhouse Pt.1’ starts sounding like a maudlin Bob Dylan after a bottle and a half of Tanqueray where as ‘Dreamhouse Pt.2’ channels Dime on guitar, in a slo-burn metal groovefest.

‘Leave Me Behind’ made me think of a heavy version of Planet Caravan in some ways. But not in a bad way, mind you!

We get a fistful of heavy hitters that lead us to the final track, ‘I’m Gonna Fly’. This one is a definite change of pace amidst the intensity of Grow. Capering vocals with some sexy noir sax which had me reminiscing about Kill City, and I have to say, my pick of the litter too.

No epic prog-metal experimentation here, but Grow is a solid release, chock fulla screaming guitars, sax (albeit just on closing track ‘I’m Gonna Fly’) and suitably angst-y lyrics and tunes. Enough melodic elements to the songs to make it appeal to those who like their metal slightly more accessible, but with enough dirt and balls for the heavier side of life too, although a few songs with stronger choruses would possibly do the bands output the world of good.