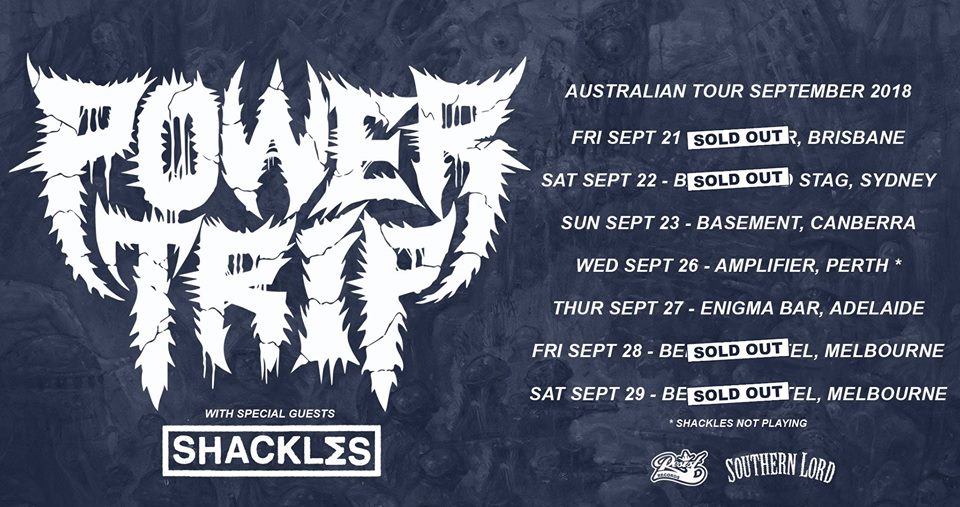 Going to a Power Trip gig was like being set into a battle zone with nothing but a water pistol to protect yourself. Support band Shackles pulverised the crowd up first by body slamming them into the floor and then continued to round house them for 40 minutes or so.

For their inaugural trip to Australia, Power Trip made a very lasting impression on Melbourne.

They’ve released two albums, Manifest Decimation and Nightmare Logic, they played one or two songs from Manifest but most of the set consisted of tracks from Nightmare Logic. The bands style of classic thrash (Metallica, Sepultura and hardcore punk Unsane) in my opinion is why they’re so popular, they wear their influences on their sleeves proudly.

The Bendigo was the perfect venue to see Power Trip, low ceiling with no means of escape, once you were in it was either kill or be killed, the battle was on from the first song. The blitzkrieg of noise that embattled the crowd to jump out of the way of guitar riffs were being shot from stage.

The title track from Nightmare Logic really set the night on fire, the energy from the band and the crowd was  really pushed into the red. Other highlights were ‘Soul Sacrifice’ where Riley Gale could of easily burst one or two veins on his neck.

When the band burst into’Firing Squad’ it was exactly that, bodies were flying all over the stage. The battle line was drawn and if you overstepped that line say goodbye to your safety.

They finished off the set with ‘Crossbreaker’ from Manifest Decimation, and like that it was over, the heart rates from the punters would have been running on a high for at least 24 hours.

I would like to think Power Trip will be back to finish of the battle sooner rather than later.