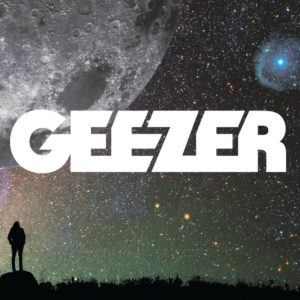 At first glance, Geezer made me think of Fu Manchu minus the pop sensibilities a lot of Fu stuff has. A few spins later, and I’m still vaguely reminded of Fu, but there’s a whole cauldron of other sounds bubbling away here as well. But more on that later.

Geezer come from Kingston NY, and formed around an obvious love of Sabbath and all other things imbued with stoner goodness. This trio has a cool take on riff-rock, and the debut LP has plenty of great moments.

They break the ice with ‘Sunday Speed Demon’ and ‘One Leg Up’, foot to the floor rock tunes with gravel rash vocals, a neat rhythm pummel and some savage guitar playing too.

Geezer knock it back a couple of gears with ‘Sun Gods’ and ‘Bi-Polar Vortex’, a couple of space-rock epics with a combined length of around 18 minutes. Lots of atmosphere, while the guitar creeps around the drums and bass. They make for a sweet late night interlude too.

‘Dust’ is a low-paced grind, which eases into itself with some gently played guitar, before launching into some medieval-esque riffs and an insistent drive. Got a good catchy chorus too before it begins a slow fadeout.

‘Hangnail Crisis’ trips through some more space rock before they close the ledger with ‘Superjam Maximus’ and ‘Stoney Pony’, both songs come fully equipped with the fuzz cranked to 10.

Geezer don’t fit your standard rock’n’roll template, but they rock the fuck out nevertheless. I always dig hearing bands who just roll into their songwriting without trying to imitate and just forge their own style and sound. Geezer are one of those bands, and certainly do it well. In this day and time, when it’s more or less impossible to write a song that DOESN’T sound like something else, hearing a record as good as this one is something of a bonus.