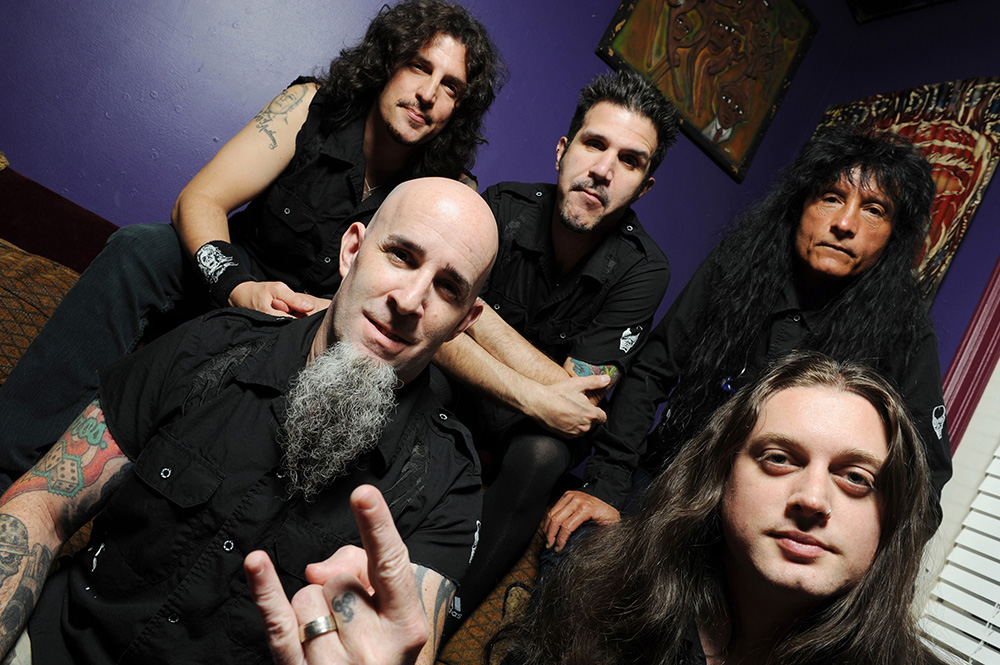 I first discovered Anthrax at the tender, wide eyed age of fifteen. There was an older kid at my school who was heaps metal and gave me a burnt CD of Among The Living. I listened to that thing every goddamn day until my friends were so sick of hearing it that the very mention of Anthrax made them sigh with pained exhaustion. Ten years on, I still pump that shit on the reg.

Needless to say, I was just about shitting myself when I made a phone call the other day and Frank Bello answered. Luckily, Frank is a bloody top bloke and quickly reassured me there was nothing to be nervous about.

Originally a roadie for the band, Frank Bello joined Anthrax shortly after the release of their 1984 debut Fistful Of Metal and has remained their permanent bassist ever since (not counting the time he left in 2004 to tear shit up in Helmet for a bit).

Anthrax pioneered the Trash Metal genre throughout the 1980’s by blending elements of NWOBHM and hardcore punk with soaring, anthemic melodies and a unique lyrical style. Like many heavy bands of the era, Anthrax went through an awkward late ‘90s / early ‘00s phase where they had a red hot poke at being a commercial rock band and almost everyone hated it. The New Yorkers have since gone full circle and made a return to form with their upcoming album For All Kings.

Joel Parnell: “For All Kings is an album that has seen you guys bring some of that classic, ‘80s thrash Anthrax back into the mix. Your contemporaries in Metallica made a similar decision on Death Magnetic and even Black Sabbath have done a ‘return to roots’ thing on 13. Did seeing those guys do that inspire Anthrax to go in a similar direction?”

Frank: “Honestly man, I think we just wrote what we wrote. That’s just what’s in us now. I don’t think you can pretend to do anything. All you can do with songwriting is write what’s in you. I’m happy that Metallica and Black Sabbath are back writing heavy stuff because our metal community needs that. I’m really excited about that. With Anthrax I think we’ve always written for ourselves because we’re fans of this and quite honestly, I think this is the heaviest Anthrax record. I’m quite happy with where we’re at right now.”

Joel: “Do you guys see yourselves playing well into your seventies like Sabbath?”

Frank: “(Laughing) Look, as far as I can tell, the crazy thing about Anthrax is there’s a whole resurgence in everything we’re doing right now; from the songwriting to the fan base, I have to say, it all goes back to when ‘The Big Four’ tours started. It gave us the opportunity to go into a completely different fan base, like a whole new younger generation, also with our own fan base that we have already. We have a really great blend of people anywhere from twelve years old to people in their fifties, it’s awesome. We see this in the shows, we see a great mix of people and everybody’s welcome. It’s a great thing to see right now.”

Joel: “What has been your personal favourite Anthrax album over years? Obviously apart from this one we’re trying to plug right now…” 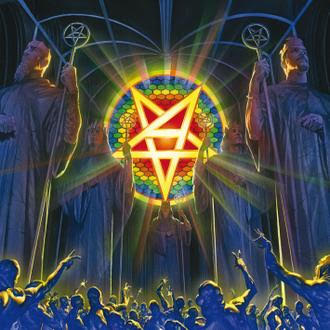 Frank: “Well it’s hard you know, they’re all like your kids. It’s hard to pick them apart! (Laughing) Or that’s what I’ve told you because I have to promote For All Kings right now. But I think we’re in a really good place right now as a band, the band’s getting along really well internally. I think we’ve hit a great vein of lightning. There’s a great chemistry going on with songwriting. Right now, creatively, I think we’re at our best point. I’m really excited, as we speak it’s like jumping off, it’s like “Wow!” There’s a hunger and an energy in the band that I think comes out on the record and live right now so I’m really excited for the future, honestly.”

Anthrax are responsible for popularising the idea that metal and hip-hop should be mates and have mad jams together. You might even say that Anthrax were the original nu metal band and one of the biggest contributing factors to why Fred Durst is a thing. I asked Frank if he necessarily likes everything that Anthrax have inspired over the years.

Frank: “Dude, for me it’s at the top of my list. To hear a band or a guitarist that’s been inspired by you, it’s like the ultimate accomplishment. Anything that helps you get to where you wanna be in your musical life, or your life, that I helped or that I inspired, I feel great about that. If it makes you feel good, if it inspired you to write any kind of music, any kind of art. I think everybody has their own take on it. I love passing the torch because people who have passed the torch to me, I don’t know if they like it but they’ve been a big part of what we’ve done and I thank them for it. Dude, anything that helps you through your life and to get away from the daily stuff you have to deal with in life and helps you feel a little bit better, if I can help inspire you to do that: All Good.”

Joel: “Speaking of passing the torch, who has been your biggest inspiration as a bassist?”

Frank: “My biggest influence is Steve Harris, Geezer Butler and Geddy Lee. To this day they still inspire me because they keep putting out the best stuff. Quite honestly, that’s just the way I like where bass goes and there’s other bass players that I love, but those are definitely my three main influences.”

Anthrax are a furiously energetic live band and Frank Bello is hands down the craziest fucker on that stage. The dude just explodes with pure, heavy metal headbangery. A state of gung-ho euphoria fuelled by years of devout rock and roll worship. I asked him how the fuck his spine stays intact after a tour.

Frank: “(Laughing) Believe it or not, I do yoga! Just because it elongates your muscles to stay in shape and to stretch out. Believe me, there are days when everything hurts anyway and it doesn’t matter. If I didn’t do the yoga thing, believe me dude it would be a lot worse. I started doing it about five years ago, a chiropractor told me to get into it. That’s really made it a lot easier to tour, and believe me I have periodic adjustments because of what we do on stage, but that’s all part of the game. I enjoy it, the energy gets me going. I don’t feel it till after the show.”

Joel: “The secret to excessive head banging is yoga?”

Joel: “Why is the new album called For All Kings?”

Frank: “Well it’s about being your own king of your own kingdom; controlling what you can control. Like for me, I wanna be the best I can be, in my kingdom. You understand? I think everybody can read that title. I love that title because everybody can take something from it in their own way, in a really positive kind of way.”

Joel: “What’s pumping in your stereo at the moment?”

Frank: “There’s this band who’s playing with us who I really like; Deafheaven. Have you heard of em? Check em out. I’ve been really digging them a lot. I just got some new stuff from them, they’re really good. They’re a really good band live. The crazy thing is that I’ve been listening to a lot of Anthrax. When you do the studio thing you’re not singing and playing at the same time, you do separate tracks. I’ve gotta learn all the backup (vocals) for the record for when we’re doing this stuff live, so literally learning how to coordinate that stuff. Aside from that I’ve been listening to a bit of Iron Maiden funnily enough because we’re going on tour with Iron Maiden next month.”

Frank: “Yeah and we’re travelling on the plane with them and…

Frank: “I heard he is, periodically. It should be good. I’m really looking forward to it. I’ve been rocking a lot of Led Zeppelin lately, just because Zeppelin rules. Then I can go to Elvis Costello (laughing) and The Clash. I’ve been listening to a lot of The Clash lately just because I would like to hear more of that stuff being written again (Laughing).”

Joel: “The music business has obviously changed a lot since you guys came up in the eighties. You guys were sort of at the start of the whole DIY thing, coming off the back of the punk rock movement and all that. Now, it’s really different. Bands rely heavily on social media for promotion. Facebook, YouTube and shit like that. What advice would you give to a young band trying to make something for themselves now?”

Frank: “Well first, it’s so hard now and I feel bad for younger bands. For that matter, what kind of real music business is there? It’s really tough to get a deal; it’s tough to get gigs. All I can recommend is if you’ve got the fire in your belly, you need the fire in your belly to do this, you really have to want it, you have to just really tour and tour anywhere. Get in the van and do your stuff, as we did in the eighties when we did it. It’s very much that now. Get your music out with social media or however you can do it. Make people hear your music and develop your own crowd. It’s just not as easy as it used to be but one thing that you do have is social media and that’s really important because that’s how you can be getting your music out there.”

I wrapped things up by wishing Frank and the boys the best of luck with their upcoming tour with Iron Maiden and that we’d hopefully see them in Australia again soon.

Frank: “Dude I can’t wait to get back there, I’m ready now!”