The Old Bar is not only a den of drunken debauchery of the aural inclination. It also boasts an art gallery which can be found up a flight of stairs on the first floor for your visual and intellectual stimulation.

The normally white walled exhibition space was transformed into a darkened gothic lair. The room was filled with a dark soundtrack of doom classical noise-scapes and the air thickened with short bursts of smoke from a smoke machine hidden in the corner. The walls were covered with black flowing satin upon which framed images of scanned faces pressed against glass were hung. These faces are friends of Elisa’s and many people involved in the project are local musicians. One set of four images are local band ‘Mutton’, another is ‘Gold Class’, both of whom were playing at the opening night downstairs in the band room. ‘Acts Revelations’ played on the evening but weren’t in the exhibition as they had replaced ‘Whitewash’ last minute due to the singer being in France.

In each of the four corners of the room, larger images of strong woman looking back into the space confront the viewer with direct eye contact and stolid expressions. These women felt like guardians, protectors, perpetrators or even witnesses to the space and what had ‘happened’ in it.

Two large chest height metal cube structures filled the space diagonally and featured Elisa’s own welding in their construction. These cubes are entwined with leafless vines which soften the harshness of the metal but set an eerie and foreboding scene of nature enveloping or being made to envelope the structures. These cubes entwined with vines felt like alters to a mass of heads in glass jars suspended from the frame with twine. Dozens of jars of varying sizes held scanned images of faces; a collection of severed heads. A serial killers trophy room? A pagan / Wiccan / satanic ritual space? Several candles placed in the centre of each structure upon moss and flowers heightened the sense of ritual.

Filling the darkness of the space was the lush, decadent and beautifully dark floral work of Jules Christie. Suspended from the ceiling was a hanging totem style piece which had a delicate and dark floral arrangement, the centre of which was a suspended terrarium with a red bloom invoking a reference to True Detective. Two larger arrangements spilling up the wall were spectacular; the red and green organic matter complimenting and contrasting the dark walls, metal framing and subject. The moss and flowers used would decompose and perish over the course of the exhibition making it an evolving piece over time.

I quite enjoy overhearing people in galleries. One person remarked how two of the heads in the jars were facing each other, squashed forever in an ‘impossible relationship’. Another remarked how the shadow of the suspended shape joined the two metal structures on the floor. People handled the jars, turning them around looking for their friends or themselves, letting them swing.

Jones and Christie put a great deal of work into creating not just an exhibition of images but an immersive experience that’s well worth checking out. 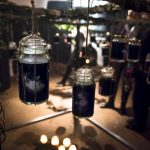 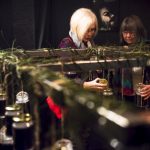 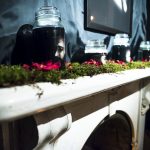 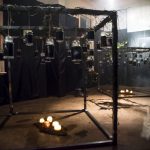 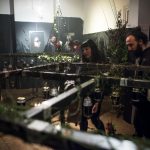 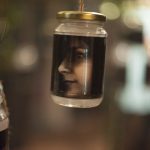 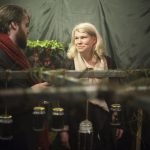 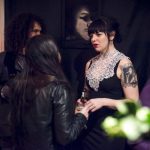 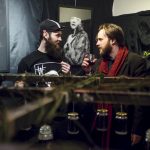 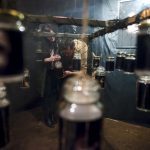 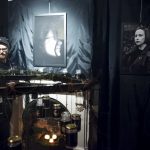 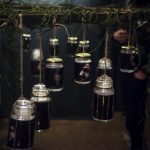 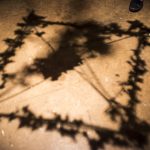 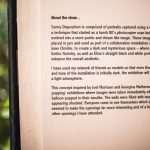 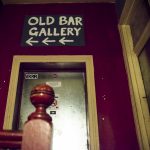 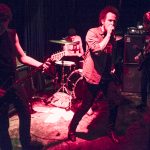 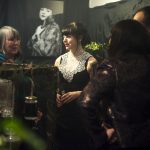