I reckon it must be a tough gig to be Ella Hooper. She has been present in mainstream pop culture through music, TV and radio for years now, but with the mere mention of her name, Killing Heidi is still the first image to spray across my mind. Admittedly, four ARIA awards on your debut album isn’t a bad way to start your career, especially for a couple of kids from the very small (but very cool) Violet Town. It’s a hard feat to top as it kind of sticks and can preserve you in the national pop consciousness as being that young 16 year old full of dreads in that film clip with the picture frames.

That said, Ella is back on the scene music wise. ‘The Red Shoes’ is the third single to be launched from her new album ‘In Tongues’ which is set for release in September. She has slowly been dropping tracks from the album over the last year, and from what I heard at the launch, this release will be her new ‘coming of age’ album. Hooper’s chance to really Kill Heidi, or at least put her in her place. It has an implied darkness in its sound and lyrics which serrates the edges from what could have been a clean pop record into a much fuller and interesting body of work. Vocally, her wide range was exercised in full with swirling dark melodies with impossibly catchy choruses. The slow release of the singles through a series of launches suggests that she is taking her time developing this new project; keeping in mind she is also extremely busy professionally in other mediums.

The launch was held at a sold out Shebeen in the city on a Friday night. Packed in her bag were two very impressive support acts, Kira Puru and Glen Mossop (Bonjah).

What can you say about Kira Piru that can do justice to this woman? Ha! I almost dare not try. She is the one blues / soul songstress in this town that you do not want to fuck with. Live, she will rip your head off and make your exposed spine weep with delicate beauty, all without spilling a drop from her glass of red. How did she fare at this gig? Absolutely no idea. I literally arrived for the last strum of her turquoise telecaster and her voice reverberating to a stunned and silent room. I can only gauge her show from the jaw dropping expressions of awe, the crowd left gasping as the lights were raised.

Glen Mossop has one of those voices which you want to rub on your body and strangle at the same time. It has a raw and raspy perfection with a unique enunciation and makes you want him to either clear his damn throat or make out with you. Or both. The man presented a gentle and sweet bluesy set on guitar with Hooper coming to join him for a duet. This isn’t the first time Hooper and Mossop have sung together, she can be found on the title track of the 2014 Bonjah album ‘Beautiful Wild’. Mossop finished everyone off with a nod to Leadbelly, even managing to brave up the punters to sing along to an excellent rendition of ‘Midnight Special’.

Ella Hooper bounced onstage to find, to her delight, a fan had left a pair of red shoes onstage and many fans sporting said red shoes. The four piece she was fronting came dressed for the occasion. The bass / sampler was adorned with a towel curled over his head, perhaps wanting us to picture him freshly showered? The guitarist sported an overly large black hat, whilst the keyboardist rocked a Newtown beard and a long silver square sequinned top. Hooper was light and bubbly, giving love to the sold out crowd and to the venue, of which she has herself become a barfly. Her eyes also let us know she was genuinely excited to be there.

Opening with Wild Stallions, the set started with a dark pop flavour, the crowd literally eating it up. Up next was the title track ‘In Tongues’. This song struck me as being quite clever, a bit fucked up and boasting a great hook. That’s a winning combination. Enjoying the consistency of the darker edges to this pop sound, I realised how different this Ella was to that 16 year old of yore and my preconceived notions abated. ‘Haxan’ continued in this vein and the first single ‘Low High’s percussive lines were filled with some pretty cool call & response from the band.

My one gripe with this show however, I had brought with me from home; the name of the track ‘The Red Shoes’. You cannot look away from the blinding fact that Kate Bush owns those three words when said in that order. This was heightened by the fact the song previous to ‘The Red Shoes’ was in fact a Kate Bush cover. Albeit a very good reference to sport taste wise, it definitely made me smart a little. Duetting with Jack Colwell the delivery was great but the reference felt too close to the bone. Or maybe I’m just old and a smug elitist.

The song itself? The live version rocked out harder than the recording with some shreddy guitar sounds (win) and has a really strong chorus, “I’ll be dancing in my blood” (win). The middle eight has a Lene Lovich / Kate Bush flavour with the “left foot, right foot” lines (win). There may even be a dash of indie cred in there for her yet!

Cons: Hooper seemed to perform the songs rather than let them out, maybe feeling a little self-conscious or nervous perhaps? With a handful of abandon, I think these songs could be taken to another level live. Either way, we’re gonna be hearing these tracks on the radio. 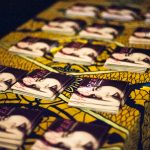 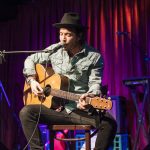 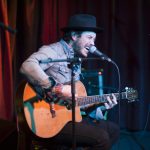 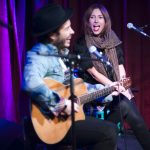 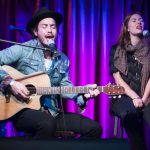 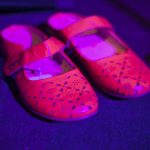 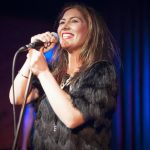 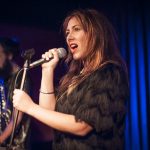 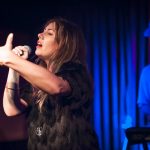 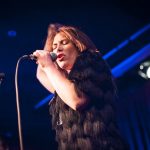 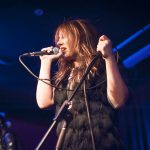 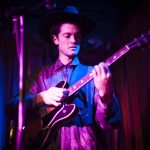 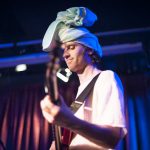 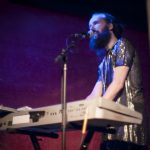 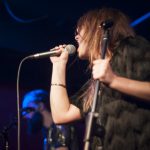 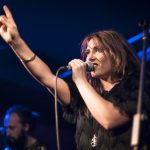 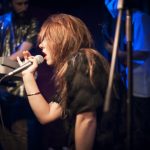 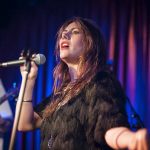 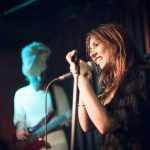 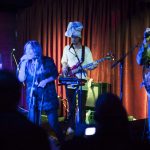 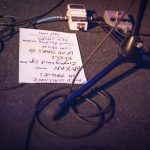 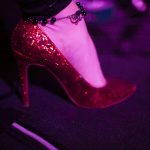 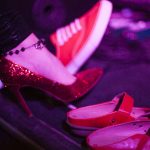